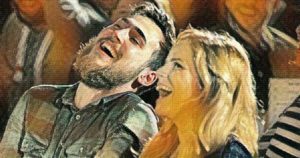 The short answer to that question is that there is no such thing as a best comedy topic for stand-up comedy material and here’s why I say that:

The sense of humor that anyone has is formed as a result of a number of factors. The experiences, observations, opinions, views, etc. that activate a person’s sense of humor are different for everyone on an individual basis.

Subsequently, trying to find the best comedy topics for a stand-up comedy act in the “generic” sense is much like trying to find a “one size fits all” pair of shoes.

One of the reasons that prospective comedians try to “find” comedy topics is that they don’t trust the sense of humor that they have (or the topics that they talk about that activate their sense of humor) to give them the results they want on stage – which is to get the biggest laughs possible.

Virtually any topic can be an outstanding comedy topic for a stand-up comedy act provided it activates your sense of humor and the audience can relate to or appreciate what it is that you have to say and express on stage.

To find the widest possible range of comedy topics for stand-up comedy material possible, you need only check out comedian videos on YouTube.

Reflect back on conversations that you had with others over the last several months and what you were talking about that made the person or persons laugh. What were the topics of those conversations?

I suspect you will find the range of topics covered in those conversations will be wide and varied. I also suspect that a number of those topics of discussion could be more than suitable as the basis for stand-up comedy material.

Developing a high level stand-up comedy routine is certainly a process, but it is not hard at all if you have comedy talent and you know how to capture and structure your sense of humor for the stage as a comedian.

Identifying the comedy topics that will work for you and your unique sense of humor is just one small piece of the puzzle. The reality is you have more comedy topics and potential comedy material right now than you will will ever have stage time to perform.

That is, if you know how to tap into it. That’s the foundation for my online course for comedians.

But I can assure that trying to find a list of “generic” comedy topics that will somehow magically work for you as the basis of a stand-up comedy act that gets the big laughs is a most serious waste of time.

Let me put this another way…

When you make people laugh in everyday conversations, do you choose any sort of carefully selected comedy topics in advance? Nope, it doesn’t work that way.

What can you say about the comedy topics that you used in everyday conversations that caused others to laugh?

You May Also Like:  How Can I Avoid Bombing On Stage As A New Comedian?

Why, those topics allowed you to EASILY use your sense of humor and natural comedy talent without much thought. Also notice that you didn’t stop and “write” what you were going to say in advance.

You should also be aware that there are certain things that “trigger” your sense of humor and allow you to use your comedy talent that wouldn’t provide the same “trigger” for someone else.

So if you want to know some real secrets for a creating a stand-up comedy routine that gets the big laughs, here they are:

However, if you are looking for some sort of “generic” comedy topics that magically work — well, I wish you the best on that because you are essentially playing the lotto when it comes to “finding” some sort of comedy topic that will get you what you want which is big laughs.

If you don’t get anything out of this article, just know this:

If you’re a funny person in everyday life, you already have HOURS of potential comedy material to tap into if you know how to do it without the hassle and frustration of having to “find” some sort of off-the-shelf comedy topics or having to write jokes out of thin air.

Unfortunately, what I have to say usually falls on deaf ears and folks would rather suck on stage for months or even years before they make any real progress.

That is, if they don’t just quit altogether because they just can’t seem to figure out what they need to do to get the big laughs they want when they hit the stage.