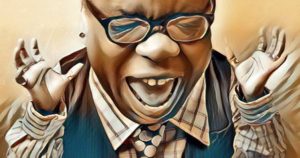 Yes, you can overcome stage fright. But you have to know what causes stage fright to happen in the first place if you want to get rid of stage fright and excel as a comedian.

There are two primary aspects that work in tandem to either accentuate or reduce stage fright:

1. The subconscious mental connection you have with the prospect of performing in front of an audience. This aspect is the major cause of stage fright but is significantly reinforced by the next aspect which is…

2. The confidence that you have in the process you are using to create, develop, prepare and deliver your stand-up comedy material.

If you are experiencing stage fright, that means that on a subconscious level that you are mentally connecting stage performances as being a dangerous activity which activates the sympathetic nervous system (which is also known as the flight or fight) response).

Once you have this mental connection established (also known as an “anchor” in NLP), you might as well be facing a tiger that is about to attack you – the automatic physiological response is essentially the same as stage fright.

Now let’s discuss how the confidence that you have can reinforce issues with stage fright.

If you have taken an important test, whether it be for school or related to employment and you did not study, you automatically have a sense of impending doom because you are fully aware that failure is imminent, causing a great deal of anxiety.

The same condition is true in stand-up comedy. Most comedians really do not know what they are doing when it comes to developing and delivering a stand-up comedy act.

They try to write jokes out of thin air from a blank piece of paper without any sense of whether they will be funny or not on stage.

They don’t know how to properly prepare to deliver their stand-up comedy, so the result is the same as not being prepared to take an important test.

In other words, they are only armed with almost 100% blind trial and error as the primary means of trying to perform a stand-up comedy routine that works.

Then once they get on stage and flop, their anxiety continues to flourish at a high level which continues to reinforce the mental connection associated with stage fright.

You May Also Like:  Should I Consider Buying Jokes For My Stand-up Comedy Routine?

So, what’s the solution? I can tell you how I got rid of stage fright in 30 days:

I developed a system for developing and delivering stand-up comedy that eliminated most of the blind trial and error comedians experience (see the 5 free online lessons for more information).

But the second thing I did was to replace the mental connection that I with my fear of getting on stage was to replace that negative anchor with a positive one. This eliminated the severe stage fright I was having and I haven’t had to deal with it since.

The process I used is detailed in my online course as well — and it is very, very simple to implement. It basically involves daily listening to a set of specifically crafted statements you make to in order to replace the stage fright programming you have with confidence programming.

Probably one of the most important aspects of listening to these specific “affirmations” as they are commonly referred is that there is no requirement to believe in or even have confidence that they will work. I certainly didn’t, particularly after having tried several methods including therapeutic hypnosis that did not work.

But in less than 30 days, just listening to the statements I made on the way to work and back — my stage fright evaporated. This, combined with a solid process to create and deliver stand-up comedy material that actually worked to get laughs was my ticket to success on stage as a comedian.

I should also mention that there are now also other powerful techniques to very quickly replace the mental connection or anchor associated with stage fright (ie: NLP).

That should give you a very good idea of what you will want to consider if you really want to overcome stage fright. It’s not difficult at all, but you need to want to get rid of stage fright in order to take action to eliminate it.