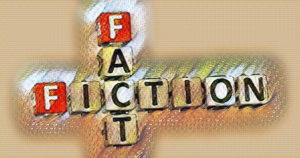 There are those who will find this article looking for some sort of stand-up comedy rules. The reality is that the only rule that matters is that you have the ability to cause an audience to laugh with exceptional frequency throughout a stand-up comedy performance.

But since you are here, let’s cover the topic of just how much of a comedian’s act is true or factual and how much of it is simply made up. I think you will find what I have to offer you here most interesting.

The first thing you need to know is that all comedy and humor has a foundation in truth, whether it be in casual conversations or on the stand-up comedy stage.

The degree that stand-up comedy material is “truthful” is dependent solely upon the comedian and what they choose to say and express for the stage.

I should point out that whatever foundational “truth” a comedian is expressing should be easily recognized by the audience as “truthful”, accurate or factual in some way or to some degree – otherwise the audience won’t respond to the comedian’s humorous perspective or point of view as it relates to the “truth” they present.

But it’s not the level of “truthfulness” in stand-up comedy material that gives a comedian the ability to generate significant audience laughter.

Stand-up comedy material can have very little literal truth or it can be virtually 100% truthful.

What gives stand-up comedy its laughter power — much more so than the level of “truth” is the level of genuineness in which the comedy material is presented.

It’ll always be this aspect of genuineness that either makes what the comedian has to say “truthful” so to speak or causes the audience to determine that a comedian is simply trying to mechanically “joke” an audience into laughing.

Most comedy material usually employs some degree of exaggeration, no matter how “factually accurate” or “truthful” that comedy material may be. This is true whether you are involved with casual conversations offstage or you are speaking with an audience.

But an audience’s acceptance of any exaggeration associated with stand-up comedy material that is presented once again will be directly related to the genuineness of the material being presented.

One of the big mistakes that comedians make is that they try to “joke” an audience into laughing at what they have to say.

In other words, they try to “sell” their comedy material in a way that is perceived by an audience as phony or made up instead of in a manner that is genuine and believable. Well, that’s because it is.

Here’s what I have told comedians for years:

Whether your comedy material is 0% truthful or 100% truthful does not matter. What does matter is that when you are on stage, 100% of everything you say must be genuine and believable in order to get the big laughs.

What I have just presented provides some of the reasons why paper written “jokes” that have been “crafted” out thin air using fabricated premises tend to flop miserably on stage with great consistency.

You don’t believe that? Suffer through ANY stand-up comedy open mic night anywhere on the planet and pay close attention to what most of the comedians who get on stage are trying to “sell”.

Note: There is already a massive glut in the market of new comedians in every location globally who are exceptional at bombing on stage. FYI.