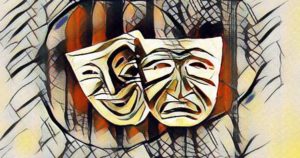 Unless you are working on developing a special stage character as a comedian (which is not required), there is a major difference between acting and delivering a stand-up comedy act.

Acting involves a special skill set with the purpose of transforming into a different “character” as required for a specific acting role.

Delivering a stand-up comedy act that gets big laughs in the shortest time possible involves delivering comedy material as the natural, unique “character” that you already are.

Individuals who are funny in everyday life are already the most unique “character” that they will ever be.

The character that they are and that others see and respond to with laughter is already developed in a natural and “organic” way so to speak.

Acting on the other hand is not “organic” – it involves a tremendous amount of work to “transform” into a character that is different and unique from who we are in everyday life.

Subsequently, trying to become some kind of unique “character” as a comedian adds a layer of difficulty that is not required in order to develop and deliver a stand-up comedy act that actually works.

For those who want to develop a special character as a comedian, I always recommend that they take acting classes. They will get far more actionable information about character development from that perspective than they will get from ANY stand-up comedy book, class, or workshop.

It’s an unfortunate fact that many new comedians assume that because they are producing and delivering a stand-up comedy “act” that they must be “acting” on stage.

Ultimately, that causes the comedian to end up doing their acting “impression” of what they think a comedian should be on stage in their own mind (which is not natural), usually producing less than favorable results.

There is a term that is used among comedians called “acting out”, which is used to describe a particular means of expressing a stand-up comedy joke or bit.

This too leads comedians to believe that they need to “act” in some sort of fabricated, unnatural way instead of being themselves as they are delivering their stand-up comedy material – again, usually producing less than favorable results.

Here’s what I have told people for years who want to be funny on stage as a comedian:

You DO NOT need acting skills in order to develop and deliver a high impact stand-up comedy act. If you want to look at it this way…

You May Also Like:  Can You Give Me One Or Two Specific Stand-up Comedy Tips That Will Help Me?

You already have “acting” skills that are very specific and very refined for a character you are most familiar with — you.

Think about the last time you relayed a funny story to friends, family or coworkers about a person, place, experience or observation about anything. Weren’t you “acting out” certain parts of that story in your own unique way?

What most people don’t see about themselves or appreciate is their own uniqueness or appreciate what was really involved from a very young age in order to develop that uniqueness, sense of humor and associated comedy talent. But if you want to move quickly in the world of stand-up comedy…

It would be most prudent to capitalize on the attributes that you already have developed and that don’t required major work to use or apply. In other words…

You need to know how to recognize those attributes that make you funny in everyday life and apply the comedy talent that you have already developed when producing and delivering a stand-up comedy act if you want to progress quickly as a comedian.

Believe it or not – that is your fastest path to success as a comedian. Trying to become someone else — some sort of character who somehow has talent that the regular old you doesn’t have — I can think of few things LESS difficult, given what was involved for your to become you in the first place.

The real key is to learn how to harness and express the same “you” for the stand-up comedy stage that causes friends, family and coworkers to laugh. That’s how you can really make rapid progress as a new comedian.