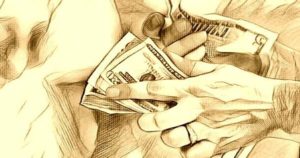 One of the things that new comedians want to know is what the earning potential is for pro comedians.

First, let me start with this:

They are usually paid in cash or with a company check and they are responsible for paying the taxes on their income earned.

The speed at which a comedian can be compensated for performances (commonly referred to as gigs) is directly related to the speed at which they can develop and deliver a stand-up comedy act that makes them eligible for compensation as a comedy performer.

Note: The primary focus of my online course is to show new comedians EXACTLY what they need to do step-by-step to develop a powerful, big laugh stand-up comedy routine from scratch in the shortest time possible.

I want new comedians to get paid for their talent, skill and ability sooner rather than later.

The income a comedian can command is largely dependent upon their skill level and the type of act they are able to deliver – which has a direct impact on the stand-up comedy markets they can work in.

Opening Act Pay. A comedian who has been hired as an opening act in the comedy club environment will usually make between $25 and $50 per show.

As a general rule they tend to consist of local talent to open for more established and accomplished professional comedians (local and visiting).

Moving beyond this level is dictated upon a comedian’s ability to generate laughs and the duration of time that they can perform.

Opening acts are usually required to perform for 15 minutes or less.

Feature (Middle Act) Pay. A comedian who has been hired as a feature act in the comedy club environment will usually make between $50 and $100 per show.

The feature act is usually required to perform for 15-30 minutes depending upon the gig requirements.

For strong feature acts who have a clean stand-up comedy act, they can also be exposed to the opportunity to open for established corporate comedians for $200+ per performance.

Headliner Pay. I’m going to approach this from the perspective of comedians who are headliners (can deliver 45+ minutes of stand-up comedy material that consistently generates an average of 18+ seconds of laughter each performing minutes) and the markets that they are able to work in.

I should also make it clear that the pay numbers provided below are low end numbers, meaning to say that the income a headliner level comedian can command can also be significantly influenced in a positive way based upon their experience, reputation, variety of gigs they can perform at, television appearances, number of followers and fans, etc.

You May Also Like:  What Do I Need To Know About Working With Talent Agencies?

Headliner comedians who work in the comedy club market and comedy one nighters can generally earn between $100-$200 for a single 45 minute stand-up comedy performance.

If a comparison is made on an hourly basis with a typical day job, that would be in the range of $133-$266 per hour. Not too shabby.

However, comedians who only have the ability deliver an “adult” or profane act are pretty much restricted to the comedy club markets and comedy club style one nighters.

Note: There is no one-size-fits-all pay scale for comedy club comedians. The comedian pay can vary widely for each comedy club or one night venue that hires comedians.

For headliner comedians who have the talent and skill to develop a clean act for the non-comedy club markets (events, parties, fundraisers, meetings, etc.), those comedians can command 5-10+ times as much for a single show as compared to the comedy club market.

Note: There is no one-size-fits-all pay scale for corporate comedians either. How much a comedian can get paid for any particular gig depends upon the comedian’s reputation, audience size, the entertainment budget of the organization, how much performance time is involved, etc.

If you want to see a few examples of the type of corporate comedy pay I was able to make during my comedy career, take a moment to check out my Corporate Comedy Secrets training module on Killerstandup.com.

Depending on the metro area the corporate comedians lives, extensive travel is not necessarily required. In other words, a corporate comedian can work locally for years depending upon their reputation and the referral business they are able to generate.

Comedians who are able to break into the cruise ship market can usually command between $500-$1500 per show starting out depending on the type of performance required (main stage or the newer “comedy club” type venues now available on some cruise lines).

Comedians who are able to work in the college market as a result of NACA or APCA showcases usually command between $800-$1200 per show in the beginning.

That should give you a fairly good idea of what kind of baseline income relatively new, yet skilled comedians can make for performances in a variety of markets.

And it only goes up from there if they can consistently generate the big laughs.

24 Replies to “How Much Do Comedians Get Paid?”