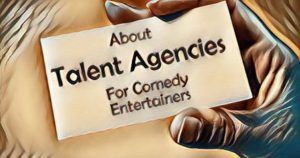 Before I get into some basic information about talent agencies that comedians should know, please note:

1. You MUST have a salable/marketable stand-up comedy act in order to attract or otherwise interest any sort of professional talent buyer.

This stops most funny people dead in their tracks because they DO NOT actually have a developed stand-up act to begin with.

Most people who are new to stand-up comedy think that because they make their friends laugh hard when they are cutting up after work that they simple need to ‘hook up” with a talent agent or talent scout to set them on the path to fame and fortune.

Honestly, it’s as if they could simply meet with such a person, that talent agent would be able to tell just how funny the are using mental telepathy or ESP and somehow “guide” that fledgling comedian to untold fame and riches.

Well, that is a fairy tale. That is not the way it works in the real world.

Unless you are strictly working working with comedy club bookers for feature/headliner spots – your act needs to be 45 minutes and tight. Feature (middle) acts need 20-30 minutes depending on the venue.

Note: This article DOES NOT address comedy club agents/talent bookers.

3. Outside the comedy club arena, you really need to have a clean stand-up comedy act to have even a remote chance of hooking with a talent agent/agency of any merit UNLESS you are only looking at working in comedy clubs.

So with that said, let’s talk a bit about talent agencies.

There are basically 3 broad types of talent agencies that can work with comedians: local, regional and national.

Usually (but not always) comedians who are in a position to approach a talent agency for potential inclusion in their stable of entertainers need to be at headline level and can deliver a solid 45 minute stand-up comedy routine and have a professional EPK (electronic press kit).

Most talent agencies work on a “buy and sell” basis, meaning that they charge a certain amount to provide their clients with the talent they want and pay the entertainer less in order to make a profit.

You May Also Like:  What Are The Best Comedy Topics For A Stand-up Comedy Act?

This is important to understand because sometimes a comedian can get paid significantly less than the talent agency using the buy and sell model to employ entertainers.

In other words, the difference in who gets paid how much can be unacceptable to some comedians.

Most metro areas have one or more local talent agencies that will work comedians who can deliver a clean stand-up comedy act.

The typical clientele that these agencies deal with are organizations and businesses — primarily those who are having a special event or function and desire entertainment beyond or instead of the standard band or DJ.

Subsequently, comedians who can only deliver an “adult” or profane act are pretty much excluded from local talent agency involvement because of the clientele who approach local talent agencies for entertainment.

Regional talent agencies cover a multi-state area from a central location and will work with talent in the states that they cover.

National talent agencies cover all states across the nation.

There are a few regional and national talent agencies that will work with comedy club comedians who are at the headliner level.

However you will find that most of what these talent agencies offer in the way of stand-up comedians tends to be focused on corporate comedians who can deliver a clean act because the profit base for providing such talent is far greater than providing comedians for comedy clubs or similar types of venues.

And again, comedians who approach these agencies will need to have a professional EPK in order to be considered for inclusion in their stable of entertainers.

I should also mention that unless a representative from any type of talent agency has seen a comedian’s act in person, they will typically request a longer, unedited video recording of a stand-up comedy performance (as opposed to several brief YouTube video clips on an EPK.)

This is to ensure that the comedian’s act is appropriate for the clients they work with if they are considering adding a comedian to their stable of entertainers.

2 Replies to “What Do I Need To Know About Working With Talent Agencies?”