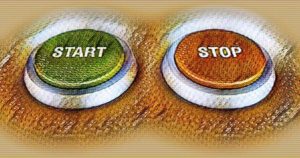 But I will also say this – most new comedians don’t realize that they already have most of the comedy timing they are ever going to have before they ever hit the stage.

Like most other aspects in stand-up comedy, having great comedy timing as a comedian is not just about one thing. It’s a combination of things that work together to make comedy timing work for a comedian.

One of the biggest issues comedians have that has a direct impact on comedy timing is called “running over laughs”. This is when the comedian starts on the next bit or joke before the audience has finished laughing.

Usually, this is caused by nervousness or lack of experience on the part of the comedian.

The problem with running over laughs is that an audience cannot laugh and listen to the comedian at the same time.

So the second that the comedian begins talking again, the audience laughter is immediately shut down.

I should also mention that comedy timing is relative to the audience in attendance at the stand-up comedy show.

If a comedian is funny and the audience is bigger, the laughter generated tends to be longer simply due to the size of the audience and the collective contagiousness of laughter.

The opposite tends to be true with smaller audiences, where the length of laughter generated is not quite as long as with the bigger audiences.

For example — the first time I performed for an audience of 1500, I prepared to deliver an hour show. But when I performed that act, I was only about at the 40 minute mark in for a comedy club show when my hour on stage was up!

What happened? The audience collectively laughed laughed much longer than a smaller audience would. But if I had not provided that audience time to laugh completely at my comedy material, the laughs would not have been as long and I would have used more material for that set.

Still other aspects of comedy timing lie in the structure and delivery of the stand-up comedy material itself. For example, if your comedy material is “written” for a reader and recited as such, that alone will affect a comedian’s timing because:

Hint: A natural pause to breathe is not required when reading the written word. Natural breathing pausing while talking can be altered significantly in the process of reciting written content.

Here are the important things you should take away from this article:

The comedy talent that you have right now and have developed over years of interactions with others is a combination of many things – your natural comedy timing is simply one of those things that works in conjunction with:

And on and on.

When you make the decision to take a shot at stand-up comedy, the LAST thing you want to do is to try to “learn” some sort of comedy timing that is outside the natural comedy timing you already have and use everyday when you cause others to laugh.

What you DO want to do is to learn to use and apply the natural comedy timing you have as it relates to the environment you are talking in — only with more people, monologue presentation, premeditated punchline injections, etc.

Bottom line: If a comedian is using natural comedy timing that they already have and use everyday when they cause others to laugh in offstage casual conversations, then the biggest timing issue is to give an audience the time to laugh.

So having great comedy timing as a comedian is a combination of applied knowledge and experience beyond simply knowing that you need to start and stop talking relative to the audience laughter generated (which there is a specific technique for that regardless of audience size).

In other words, you don’t want to ditch the natural comedy timing that you already have and is good to go for your stand-up comedy act — you want to learn how to use it to your advantage on stage.