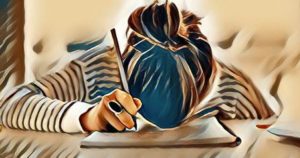 Actually, if you know how to develop stand-up comedy material based on your sense of humor and natural expressive comedy traits, you shouldn’t be experiencing writer’s block at all.

Let me put this another way…

The only comedians who experience writer’s block are those who are actually trying to “write” stand-up comedy material from a blank piece of paper in the literal sense – like a poem or short story.

Using this approach, the process for frequently experiencing writer’s block usually happens like this:

1. The comedian tries to dream up or fabricate “premises” may be funny to an audience and work on stage as the basis of a stand-up comedy joke or bit.

This is a great start to having writer’s block because using this process largely excludes the comedy talent and sense of humor the comedian uses in everyday life, opting instead for mostly guessing what may or may not be funny to an audience.

2. Next the comedian tries to “write” funny material from their made up “premises”, trying to make sure that their comedy material “reads” funny from a piece of paper.

Trying to “write” anything in the literal sense is not only difficult, but ignores the fact that audiences don’t read stand-up comedy material at all.

And once again, the comedian ends up mostly guessing at what may or may not be funny to an audience, instead of writing down and structuring what they want to express to an audience (which is easier and far more effective).

3. Then when the comedian takes their “written” comedy on stage and it doesn’t work, they don’t really have a clue why.

This is the topping on the cake so to speak when it comes to developing writer’s block because the comedian is now forced to second guess what part of their “writing” didn’t work and why it didn’t work.

Here’s what comedians need to know about writer’s block:

Trying to write anything from a position of it being “written” to be read instead of being developed to be said and expressed can and will lead to frequent bouts of writer’s block.

Comedians should not be “writing” any stand-up comedy material in the literal sense. Working from that common perspective is like trying trim hedges with a pair of toenail clippers.

Let me give you another perspective that may be helpful:

When you are cracking up your friends and acquaintances in everyday conversation, do you experience writer’s block?

That doesn’t happen because you aren’t trying to “write” material. You are simply using your sense of humor in way that is natural for you. Not only that…

The sense of humor and resulting comedy talent you have right now was not the result of “writing” – it was the result of live verbal communication interactions starting from the time as a child that you started talking.

Now don’t get me wrong — there are some significant differences between making friends laugh in conversation and creating stand-up comedy material that is designed to generate laughs from people who don’t know you (stand-up comedy audiences).

But there are also some significant similarities as far as the mechanics of laughter go between the laughter generated between friends and stand-up comedy audiences — similarities that every comedian should be using to their advantage.

In other words, the most effective way to produce stand-up comedy material that has a real chance of getting the laughs you want involves capitalizing on the dynamics and attributes that a person already has.

Bottom line: You don’t have to be a great “writer” at all to be able to develop high impact stand-up comedy material quickly.

That is especially important when you consider the fact that audiences don’t read stand-up comedy material.

Plus since the process of “writing” only involves words and sentences, most new comedians tend to deliver material that is far too wordy or detailed which has a direct impact on the number of “jokes” a comedian can deliver (set-ups and associated punchlines) in any given performing minute.

Subsequently, I firmly believe that the “traditional” approach to “writing” a stand-up comedy routine not only fuels the condition known as writer’s block but also puts a comedian at a serious disadvantage when they finally bring that “written” stand-up comedy material to the stage.

Think of it this way – nobody get’s “talker’ block”. Stand-up comedy is a honed, refined and carefully structured means of “talking” and expressing oneself in a way that is already natural for them – that’s what actually works on stage, just like it works off stage.

What I have expressed in this article is not something that I dreamed up or have speculated about. I personally went though the same issues and experienced the same writer’s block as many comedians do when I first started out as a comedian.

It ended up not only making the whole process very difficult, but I also had no real idea which of my paper written jokes were actually funny or not until I hit the stage where I discovered they weren’t very funny at all.

And the harder I tried to “write jokes”, the more frustration I experienced with my own lack of progress.

But let me also say this:

Developing stand-up comedy material for the stage can be a pretty darn simple and painless process if a comedian actually knows what they are doing – writing down and structuring what they want to say and express for the stage as opposed to trying to “write” jokes out of thin air that are by design intended for a reader – not for verbal expression.

Using the right effective and proven methods and techniques like those detailed in the Killer Stand-up Online Course, a comedian should have far more comedy material for the stage than they will ever have stage time to perform that material.

So, when it comes to producing stand-up comedy material that will actually work to get big laughs on an individual basis, the creative process simply cannot be forced (nor does it have to be).

But when it is “forced” as a process of “writing” as opposed to talking, the result is referred to as writer’s block.

In other words, whether or not a comedian experiences writer’s block to any degree is a matter of personal choice relative to the level of comedy talent an individual has and the process they use to develop and ultimately express their comedy material in the live performing environment.

You don’t experience any sort of “writer’s block” when you cause others to laugh in everyday conversations. That because you aren’t stopping to write someone a note to read each time you want to communicate.

The main reasons that you should be writing anything as far is stand-up comedy material goes are because:

Above all else, you need to understand that there is a massive difference between writing down what you want to say to an audience for the reasons that I just gave you and trying to “write” material designed for consumption by a reader.