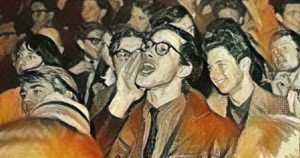 It’s been said that hecklers are an “occupational hazard” for comedians.

To a certain extent that may be true, but what is almost never mentioned when it comes to hecklers is that the vast majority of the time it is the comedian themselves who causes the heckling to happen.

Before I get into the main causes of heckling, keep this in mind — when an audience is laughing hard, there’s almost never any heckling.

The two primary causes are heckling are:

In other words, stand-up comedy audience members expect the comedian to be funny and to generate frequent laughter during their set.

Every minute a comedian goes without getting laughs means that they are not only bombing, but they become increasing susceptible to heckling.

Note: In most instances it is NOT a lack of comedy talent that causes a comedian to fail to generate laughs. It is an issue with the process that they use to create, develop and prepare to deliver their stand-up comedy material that is the issue.

2. The comedian instigates the heckling themselves. Comedians who do not have a solid stand-up comedy act that works on a consistent basis may resort to riffing (asking the audience questions with the hope of being able to respond in a funny way) or they resort to making fun of the audience members that they can see from the stage.

More often than not, this sort of activity not only fails to generate laughs but can have the effect of directly or indirectly encouraging audience members to heckle.

Now let me also make it clear that heckling can also occur on occasion when the comedian is slaying the audience, primarily due to an abundance of alcohol consumption by one or more of the audience members.

You May Also Like:  What Are The Basic Joke Formulas I Can Use To Develop My Stand-up Comedy Act?

But for comedians who have a rock solid stand-up comedy act that generates big laughs consistently, heckling is actually a fairly rare occurrence unless they are instigating the heckling themselves during their show.

The bottom line is this:

The vast majority of heckling that any comedian will experience is created by the comedian themselves and is not something that an audience would normally engage in if the comedian was generating laughs as they are expected to.

But as I mentioned before, it can and will happen from time to time even if the comedian is slaying the audience.

Even rarer still is heckling during corporate-type shows, mostly because audience members do not want to bring negative attention to themselves while their organization superiors are in the room.

And as I said in the beginning — it’s pretty hard for audience members to heckle a comedian when they are generating 4-6+ big laughs every minute they are on stage.

Unfortunately, it is somewhat common for comedians to blame the audience for any issues that they have with their stand-up routine. This is about as stupid as trying to blame a golf ball because it didn’t go into the hole after a putt.