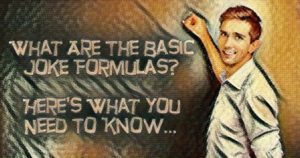 Many new comedians are under the false impression that if they can just learn and understand joke formulas that they will somehow be better able to “write” a stand-up comedy act that gets laughs.

The reality is that joke formulas as they are perceived and taught in stand-up comedy books, classes and workshops are largely a huge waste of time and here’s why I can say that:

Any so-called joke formula that you can find represents an after-the-fact description of similar “techniques” comedians used in their stand-up comedy material to get laughs.

The problem is that joke formulas only account for similarities in word or sentence structure as they are read as transcribed on paper, ignoring the comedy mechanics involved as the comedy material or punchlines were delivered by the comedian.

In other words, joke formulas exclude the majority of the attributes of what any comedian says that gets laughs and focus only on identification of the similar attributes as they apply to the literal words and sentences any particular comedian used.

Examples of any kind of so-called joke formula offer only academic recognition as well – not actionable information a comedian can use and apply to developing their own stand-up comedy material that will actually work for them.

All of that information about radio controlled vehicles is purely academic and wouldn’t help you in any way to know how to skillfully build a radio controlled car, boat or aircraft that would actually work.

Here’s what you need to know about developing a stand-up comedy act that is a bit more functional (and realistic):

1. The comedy mechanics that you use in everyday life are exactly the same as those you will use on the stand-up comedy stage to be big laughs. Think about it…

You developed your sense of humor and comedy talent by talking, not as a result of writing anything or exchanging written notes.

3. You don’t have to know a single so-called joke formula in order to be able to develop and deliver a stand-up act that works for you and your unique sense of humor.

If you think you need to be a great writer in order to produce a powerful stand-up comedy act — please let me inform you that you really don;t have a clue as to what comedy is from a live and in person perspective.

Bottom Line: Trying to learn and apply predefined joke formulas in order to somehow develop a stand-up comedy act is much like trying to paint a house with a toothpick.