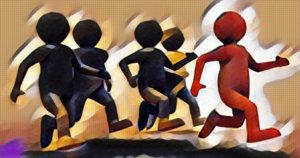 While there is a certain amount of competitiveness in any entertainment endeavor, you might be surprised to know that stand-up comedy is not nearly quite as competitive as it appears on the surface.

The reason I say that stand-up comedy appears highly competitive on the surface is because if you go to just about any stand-up comedy open mic night, you will usually find that there are many more new comedians vying for stage time than there are spots available for the show.

And at most comedy open mic nights, there are usually 20-30 spots that are filled.

So if you want to see for yourself just how little competition there really is among comedians anywhere, here’s what you do:

1. Go to any comedy open mic night armed with a blank piece of paper and the writing utensil of your choice.

3. Then, simply put a check mark by the number representing any comedian in the lineup IF they got noteworthy laughs on stage during their performance.

That’s it! And here’s what you will find in most cases:

The vast majority of the new comedians that hit the stage are very poorly prepared to properly deliver a stand-up comedy routine.

There will be some that will will try to riff through a 3-5 minute stand-up comedy set. This means they attempt to interact with the audience, usually making fun of the people in the first couple of rows next to the stage.

In other words, they have no real act to offer the audience.

It is visible (at least it is to me) that most of the new comedians who do try to deliver an act attempted to “write jokes” in a literary fashion designed for a reader working only with words and sentences to the exclusion of any sort of expressive communication aspects. How do I know that?

You May Also Like:  What Are The Basic Joke Formulas I Can Use To Develop My Stand-up Comedy Act?

I know that because the set-ups to the jokes are far, far too long before a punchline is finally delivered. This makes it impossible to generate more than a laugh or two in each minute or two of their act.

Note: Until a comedian can generate an average of 4-6+ solid laughs per performing minute of their stand-up comedy routine, they will never get past the lowest rungs of the stand-up comedy ladder. My online course is the only comedian education resource that shows exactly how to structure stand-up comedy material to do just that.

There will usually only be 3-5 comedians (if that) who are able to generate noteworthy laughs with their stand-up comedy act. And most of those comedians who can actually get some decent laughs will be the more seasoned and experienced comedians.

And I will also say this – those numbers will be consistent at almost every stand-up comedy open mic anywhere in the world.

So if you understand that the comedians who can generate the biggest, most frequent and consistent laughs will progress the fastest and get the most performing opportunities…

Then you can easily see why I say that there is actually very little competition among comedians in the stand-up comedy marketplace.

There is virtually NO competition. That is because most comedians can only develop and deliver an adult act that can only be performed in the comedy club marketplace.

So is stand-up competitive? Just follow the instructions I have provided in this article and make that determination for yourself.