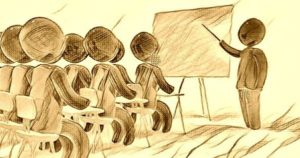 The decision to take a stand-up comedy workshop or class is strictly a matter of personal choice (and availability).

And just like most everything else in life, there are positive aspects and not-so-positive aspects when \it comes to these sorts of “formalized” stand-up comedy education offerings.

First, let’s start with some of the more positive aspects of taking a stand-up comedy workshop or class:

1. You will get the opportunity to meet and network with others who are also highly motivated to become a comedian.

This can be beneficial because you can usually find out from other students where all the new comedian performing opportunities are at in your area.

The Problem: Everyone will be exposed to “writing” stand-up comedy jokes in a literary sense designed for a reader, making it much harder to get 4-6+ audience laughs per minute due to the use of only words during the comedy material development process.

2. Most stand-up comedy workshops or classes of extended length (ie: 4-6 weeks) usually have in class performing opportunities where you can get feedback from the instructor and the other comedians in the class.

If the instructor is actually a working comedian, you can usually get some valuable feedback on the act that you develop as a part of the workshop or class.

3. Many of the extended stand-up comedy workshops and classes tend to have a graduation performance at a comedy club, which is a great way to get some live stage experience for those who have never been on stage before as a comedian.

Now let’s talk a bit more about some of the not-so-positive aspects of taking a stand-up comedy workshop or class:

Outside of being provided academic definitions of what a set-up line is, what punchline is and what a tag line is, you won’t usually get any actionable information on how to develop a stand-up comedy routine from scratch as it relates directly to you and your unique sense of humor.

You May Also Like:  How Much Of What Stand-up Comedians Say Is True?

What you will get is some joke formula recognition markers that have nothing to do with how you use and apply your already developed comedy talent when you talk with others in casual conversations. To me, this is much like trying to peddle the advantages of a one-size-fits-all shoe.

A few quick questions — when you cause others to laugh in everyday life:

The reality is that we are not all the same, nor do we EXPRESS our sense of humor the same. Seems to me that the best approach is to use a process that allows a new comedian to tap into ALL of the comedy talent they have — the SAME comedy talent that they use to make friends, family and coworkers laugh.

But that is not what you will usually get from a stand-up comedy class or workshop oddly enough, which is what people actually sign-up for — a means for producing original stand-up comedy material based on one’s own talent.

Put another way, you will get the same old “joke writing” information that you will find in virtually all books on stand-up comedy (#ad). Note: These books are a heck of a lot less expensive than taking a stand-up comedy workshop or class.

So if your primary motivation for taking a stand-up comedy workshop or class is to learn to be funny on stage or to develop a stand-up comedy act that will work for you on an individual level, the chances are pretty good that you will be disappointed in that regard.

However, I can’t really say anything negative about stand-up comedy workshops and classes because the lion’s share of the students I get for my online course for comedians come from folks who take these and didn’t really get any actionable information on how to develop a stand-up comedy routine that will work for them. 🙂