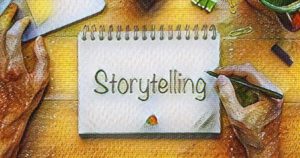 You certainly can tell stories on stage as a comedian.

As a matter of fact, there is a major advantage being able to tell stories in your stand-up comedy act and that is:

The longer that you can stay on any particular topic (like with a story), the less set-up information that you need to supply to get to the punchlines in a story bit once it has been set up.

But before you start telling stories on stage as a comedian, there are some very important things that you really need to know:

1. Even though the comedy mechanics used to generate laughs are exactly the same in casual conversations as they are in stand-up comedy, you have to make sure that the audience can understand and relate to what you present in your stories.

Think of it this way — you have accumulated experiences in a variety of areas of your life whether it be with family or friends or at the various jobs you have had over the years. Some of those experiences (which are the foundation of stories) would only be appreciated by those who were there or had an understanding about the conditions or references upon which a story is based.

In other words, if the audience doesn’t “get” the references, the context or can understand what you are trying to deliver in a story, they won’t get the punchlines you deliver related to that story.

2. In order to generate headliner laughter levels with your stories, they must be structured to deliver an average of 4-6+ punchlines per minute (for an average of 18+ seconds of laughter per performing minute).

In other words, you simply cannot go on and on with a story without getting laughs (which applies no matter what type of stand-up comedy material is being delivered).

3. The big advantages of telling stories are that they can potentially provide a large quantity of comedy material.

Also, once a story is set up (meaning the basic foundation of what the story is about has been verbalized), little addition set-up is required.

Comedians who choose to only work on a one joke at a time process have the hardest path possible because every joke or every several jokes require a separate and distinct set-up. And to add to the difficulty…

The set up of any joke or comedy material tends to gobble up the most non-laughter time during a stand-up comedy performance.

So not only are they different, but they must be short in order for a comedian to generate the average of 4-6+ laughs each performing minute to make any headway as a comedian.

Being able to deliver a high impact story involves knowing how to skillfully structure that story or topic of discussion for stand-up comedy in the first place, which is what my system is all about.

One of the things that I recommend comedians do is to find an accomplished “story telling” comedian and study how they deliver their stories (you can easily find these comedians on YouTube).

Back in the day, there were relatively few comedians who engaged in the “story telling” stand-up comedy style.

But that is not the case today. More and more comedians tend to use a story telling style than a one liner, two liner old school “joke” style because it is much easier to produce larger quantities of powerful material more quickly given the knowledge and skill to do so.

And just like most anything involving developing and delivering a powerful stand-up comedy act that generates big laughs, there is much more involved than it appears at first glance, including being able to tell stories on stage as a comedian.