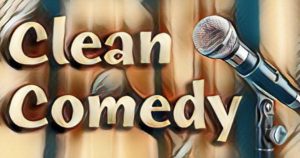 Most comedians tend to “follow the herd” so to speak and focus on the development and delivery of an “adult” stand-up comedy act.

And there’s nothing wrong with that at all. The stand-up comedy act that any comedian chooses to develop is strictly up to them and what their own creative abilities will allow.

But most comedians don’t realize that there are tremendous advantages and opportunities available to talented individuals who are able to develop and deliver a clean stand-up comedy act that gets big laughs, such as:

Uniqueness. Because an overwhelming number of comedians focus on “adult” stand-up comedy material, focused on activities involving that which happens between the belly button and the knees…

Comedians who can deliver a clean stand-up comedy act that gets big laughs tend to strongly stand out among most other comedians.

Note: Comedians who want to get ahead are always looking for ways to “stand out” among other comedians. Having a clean stand-up comedy routine that rocks a rooms among the vast majority of comedians who are limited to talking about genitalia really captures an audience’s attention.

Increased performing opportunities. Comedians who can only produce an adult stand-up comedy act are by default restricted to comedy club performances and comedy club type one nighter gigs.

Comedians who can produce a clean stand-up comedy can work in the comedy club environment as well as any other entertainment environment such as the corporate market, the cruise ship market, etc.

I have personally known several comedians who had two separate and distinct stand-up acts they could use depending upon the requirements of the venue – one that was “corporate clean” and one that was “adult” for comedy clubs.

Increased income potential. Because comedians with a clean stand-up comedy act can work outside the comedy club marketplace, they are also able to tap into the stand-up comedy performing opportunities that can pay very handsomely.

You May Also Like:  How Much Do Comedians Get Paid?

Comedians who work in the corporate type markets typically command 5-10+ times as much pay for a single performance than in the comedy club marketplace.

If you want more details about this, you may want to check out my Corporate Comedy Secrets website.

But I will also tell you that comedians who can develop and deliver a clean and funny stand-up comedy act are able to take full advantage of all stand-up comedy markets and opportunities, not just the sliver that most comedians focus on which is the comedy club market.

The real problem with only focusing on an adult act as a comedians is that it becomes much more difficult to “go clean” so to speak down the road in order to land the much higher paying gigs. And I am not just talking about the develop of the act itself.

It also has to do with the reputation a comedian builds as they progress in the stand-up comedy career. That reputation can precede a comedian, even if they have a clean stand-up act and keep them from getting higher paying work.

Just some food for thought for those serious about not just entertaining audiences as a comedian, but getting paid handsomely along the way as well.

3 Replies to “Are There Any Advantages To Producing A Clean Stand-up Comedy Act?”