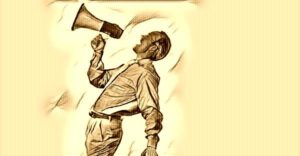 The very best marketing tool any comedian can have is a stand-up comedy act that causes audiences howl with laughter on a consistent basis.

Here’s why I say that:

It will be a comedian’s stand-up comedy act that will get them gigs beyond the open mic scene.

It will be a comedian’s stand-up act that will cause them to get approached for gigs by other comedians who run comedy rooms.

It will be a comedian’s stand-up comedy act that will cause them to get approached by talent buyers.

It will be a comedian’s stand-up comedy act that can be used to showcase for gigs – not just in the comedy club market, but in the corporate comedy marketplace as well.

Keep this in mind:

Once a comedian has performed for an audience and has demonstrated their talent and ability, it’s like trying on shoes that fit so to speak for others (talent buyers) who may be interested in possibly hiring that comedian.

Don’t get me wrong – every comedian who is serious about progressing needs an electronic press kit (EPK), which is nothing more than a professional website that has the comedian’s bio, comedy resume, short video clips, testimonials, contact information etc. and is geared specifically for potential talent buyers, comedian bookers or agents.

An EPK validates a comedian as a professional entertainer and provides information in one central place that potential talent buyers can use get more information about that comedian.

Note: Step-by-step details on how to produce a professional EPK for free is included in the Killer Stand-up Online Course.

Every serious comedian should also have a business card that they can hand out to potential talent buyers and contacts that they meet.

But make no mistake – there is NO better marketing tool for a comedian than the stand-up comedy act that they can deliver.

As a matter of fact, the stand-up comedy act a comedian has to deliver is the PRIMARY marketing resource that they will depend on to get comedy work at any stage of the game.

And this leads right into the reason why most people who take a shot at stand-up comedy never get very far, if anywhere at all as a comedian.

You May Also Like:  Will Taking An Improv Class Help Me Develop A Funnier Stand-up Comedy Routine?

For some odd reason, there are always a number of comedians who are under the impression that longevity as a comedian plays a major role in advancement as a comedian. Stand-up comedy is NOT like a government job where you can get promoted based on the length of time you have been doing it.

What potential talent buyers are looking for are comedians who can “deliver the goods” for the audiences they are servicing or representing. That means being able to generate the laughter levels needed to thoroughly entertain audiences.

Optimally, a comedian’s stand-up comedy act should be able to generate an average of 4-6+ laughs per minute, resulting in an average of 18+ seconds of laughter per performing minute.

Unfortunately, most people who take a stab at stand-up comedy harbor these false ideas that lead to failure:

You May Also Like:  How Do I Write Jokes For A Stand-up Comedy Routine?

I could literally go on and on. But just do this…

Go sit though ANY stand-up comedy open mic night. If what most people think is true about stand-up comedy was even remotely accurate, 7 out 10 (or more) open mic performers would be slaying the room when they hit the stage.

The reality is almost always the exact opposite – 7 out of 10 open mic performers will suck miserably — in some cases for YEARS without even a hint of improvement. And most of those open mic comedians will never even make it out the the open mic aspect of their stand-up comedy adventures.

Now check this out…

For the comedian who slay virtually any audience consistently — big or small — in virtually any performing environment, the opportunities for moving forward in the game of stand-up comedy come to them. And that’s because…

Very few comedians — even those who have gotten past the open mic stage — can do what I have just described in that last sentence.

So when I say that a comedians act is their best marketing tool, in the beginning it is their ONLY marketing tool. Without a solid stand-up comedy act that can rock a room night after night, a comedian ends up becoming a shoe salesman without any shoes to sell.

So the best advice I could possible provide any comedian at any stage in stand-up comedy is this:

I would focus exclusively on creating and developing the tightest and funniest stand-up comedy act possible. That alone will provide all the marketing mojo you need until you get to a level where you can begin to employ additional marketing strategies based on the market or markets you can and want to perform in.