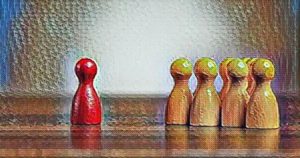 If you subscribe to what most of the popular books on stand-up comedy have to offer about standing out from other comedians, they imply or blatantly express that you need to develop some sort of “hook” or gimmick.

Ironically, NONE of these books provides so much as an actionable clue about how to actually develop this so-called “hook” or gimmick that will set you apart from other comedians.

From my professional perspective, there are only two primary things that make a comedian stand out from other comedians and both of these factors are in the control of the comedian themselves:

1. Be funnier than most other comedians. While that may seem obvious, let me be more specific…

Any comedian who can generate a minimum average of 18 seconds of laughter per performing minute is in the top 1%-5% of comedians anywhere regardless of the “title” they hold.

And you should know from writing that a comedian does not have to be a headliner in order to develop and deliver headliner level stand-up comedy material.

Note: If you frequent the stand-up comedy open mic scene over time, you will notice a few comedians who can deliver the big laughs – some will be headliners, but others will not. Pay attention to the progression and opportunities afforded to those who can get the big laughs (Hint: That information is usually included in a comedian’s introduction to the stage).

You also do NOT need to have some sort of special gimmick, character or “shtick” in order to get the big and frequent laughs you need to set you apart from other comedians.

It was during this pre-cable TV era when comedians would shoot for network TV exposure, which required a clean act.

Subsequently, comedians who could deliver a funny “blue” act stood out among other comedians and reaped the benefit of this “uniqueness”. Redd Foxx, Richard Prior and Andrew Dice Clay are a few that come to mind.

It is not my job or desire to dictate what type of stand-up comedy act a comedian chooses to develop and deliver. That is completely up to the artist.

I have also been informed that comedians with a clean act have a better chance of landing TV and film gigs than those that have a more adult act. The broader the audiences that any comedian can perform for, the more performing opportunities that are available.

The bottom line is this: I want everyone who pursues stand-up comedy to be able to have the most opportunities for success possible.