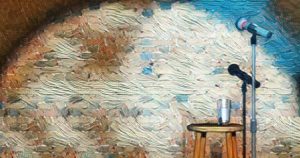 There is simply no way to pinpoint how many performances it will take any specific individual to be funny on stage with their stand-up comedy act.

The reason I say that is because there are simple too many unknown factors involved to accurately answer that question in a meaningful way for any specific individual wanting to get big laughs as a comedian.

Some people can start killing audiences in very few stand-up comedy performances. For others, it can literally take years. But I think what is important to know is this:

The speed that any comedian can progress when it comes to getting the big laughs with their stand-up comedy act is relative to a number of important factors, including but not limited to:

1. Talent level. While most people who take a stab at stand-up comedy believe they have more than enough comedy talent to become a comedian, the reality is that not everyone does.

The real problem that most new comedians have is that the sense of humor and comedy talent that they use in everyday conversations never makes it to the stage because:

But this is just small sample of the roadblocks for who do have enough comedy talent to kill an audience (again, which is most people).

2. The stand-up comedy material development process. Most new comedians are absolutely clueless when it comes to how to develop and structure a stand-up comedy routine based on their own individual and already well develop comedy traits.

As I mentioned earlier, they opt to try to “write” their way to being funny on stage, which tends to severely hold new comedians back from ever actually “killing” an audience with their stand-up comedy act.

You May Also Like:  Should I Take A Stand-up Comedy Workshop Or Class?

There are all kinds of reasons why “writing” in a literary sense like most so-called stand-up comedy experts say it must be done fails the new comedian.

But the primary reasons “writing” doesn’t work is because:

3. Pre-show preparation. Most new comedians are very poorly prepared to deliver a stand-up comedy act that is going to generate big audience laughs, if they are prepared at all.

As a matter of fact, the only time most new comedians “rehearse” is when they actually get in front of an audience – which is way too late.

Why anyone would want to step on a comedy open mic stage unprepared is beyond me, Stand-up comedy is challenging enough as it already.

Ironically, with the exception of having the baseline comedy talent needed to be a comedian (which again, most people have all they need), all the other factors I have presented above are within the control of the comedian themselves.

So what I have presented in this article should give you a very good idea why some people can begin killing on stage as a comedian in very few performances and why others may need to have hundreds of performances under their belt before they can attain significant audience laughter.

It should also give you a pretty good indication why talented individuals who use and apply the actionable information provided in the Killer Stand-up Online Course don’t usually have to wait for many months or years to start killing on stage.

You May Also Like:  How Do I Market Myself As A Comedian?