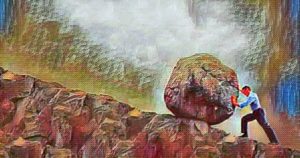 If you want to know why traditional stand-up comedy joke writing is such a difficult, hit-or-miss affair for most comedians — here’s one question that you should ask yourself now:

Are you trying to “write” jokes the way all the stand-up comedy books, courses and workshops say that you should?

Here are some of the problems that you will encounter using the “standard” joke writing methods:

Depending on the stand-up comedy book, course or workshop you take, it is either expressed or strongly implied that how well a joke will work on stage is primarily dependent on the skill of the artist to “write” jokes that “read” funny from a piece of paper.

If you want to verify this for yourself…

Simply go to YouTube and find a comedian who is killing on stage (an average of 18+ seconds of laughter for each performing minute) simply using your smartphone and the the information provided in this report:

Transcribe just one minute of that comedian’s act, then read it.

You will find that much of that stand-up comedy material does not “read” funny — it doesn’t matter which headliner level comedian that you choose to transcribe a bit from their act.

“Writing” is one dimensional, requiring the use of many more words in order to paint a visual picture.

It is a comedian’s delivery that allows an economy of words when entertaining an audience because they make the most of their body language, facial expressions, and voice tone and pitch variations—not just “written” words and sentences memorized from a piece of paper.

Here are some common stand-up comedy myths that I would like to just completely smash:

1. You have to be a great joke writer to be funny on stage as a stand-up comedian.

That is absolutely FALSE. You don’t have to know how to write one single joke in order to produce big laugh stand-up comedy material.

Hint: When you make people you interact with offstage, do you stop to “write” something for someone to read in order to get a laugh?

2. You can’t tell stories and you must tell one and two line “jokes”.

Again, this is 100% FALSE. You need only review performances of the most popular comedians to immediately see that, yes you can tell stories on stage.

Check out this video from comedian Steve Trevino and you tell me if you can’t tell stories on stage:

3. Writing is the most important part of developing great stand-up comedy material.

NOT! Given the information provided in this article, it should be obvious that “writing” alone has the least impact when it comes to delivering big laugh stand-up comedy material.

Being able to express yourself in a confident, concise and genuine way in front of an audience that is natural for you (delivery) is far more important than being able to “write” jokes for which you really have no personal connection and must learn to “sell” to an audience.

But if you still believe that you are more suited to the more “traditional” approach to developing stand-up comedy material, may I suggest that you get your hands on any number of these books on stand-up comedy writing (#ad). Put those “joke writing” formulas and whatnot to the test.

You tell me which scenario below would give you the most confidence in your stand-up comedy material before you hit the stage:

That last statement describes in a nutshell what the Killer Stand-up Online Course is really all about — showing funny people how to capture and structure their own natural sense of humor for the stage in the most powerful, easiest and fastest way possible.

Traditional “joke writing” is an extremely difficult skill to learn and master.

I have the greatest respect for those who still approach stand-up comedy using this ancient methodology and can command big laughs on stage.

Well, now you have another option. 🙂