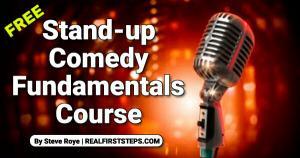 On this page you will find an introductory course for new comedians (and funny public speaking types) called the Stand-up Comedy Fundamentals (SCF) Course.

This is the same free stand-up comedy course that is available on my big blog for comedians at RealFirstSteps.com.

If you are under the impression that there is probably limited value and a lot of fluff in a free stand-up comedy course for beginners, please note:

I will put the value of the information in this free course up against ANY conventional paid resource that focuses on “writing” stand-up comedy material. Period.

Here’s why I can say that with great confidence:

Conventional methodologies about creating a stand-up comedy routine focus on techniques, strategies and methods that simply DO NOT HAVE ACTIONABLE VALUE to help you achieve what you really want which is…

Quickly gain the ability to develop a killer stand-up act without having to suck for months or years in the process like most do.

Is This Information That You Can Use?

So that there is NO misunderstanding as you move forward, please note: 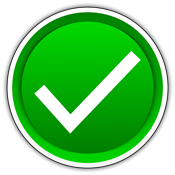 While the information provided in SCF Course does not represent an all inclusive, beginning-to-end type of how to resource like my other courses…

This course is designed to provide you with what I feel are some of the most essential and fundamental aspects of stand-up comedy that a perspective comedian should know, such as:

That’s just a very small taste of the type of information provided in the first two Modules of the course.

The Stand-up Comedy Fundamentals Course is composed of these elements:

*Articles selected for this course have the display ads removed.

Here is a screenshot of the Members Area page for the Killer Stand-up Online Course — please note that Step 1 for the fastest path is to review the Stand-up Comedy Fundamentals Course below: 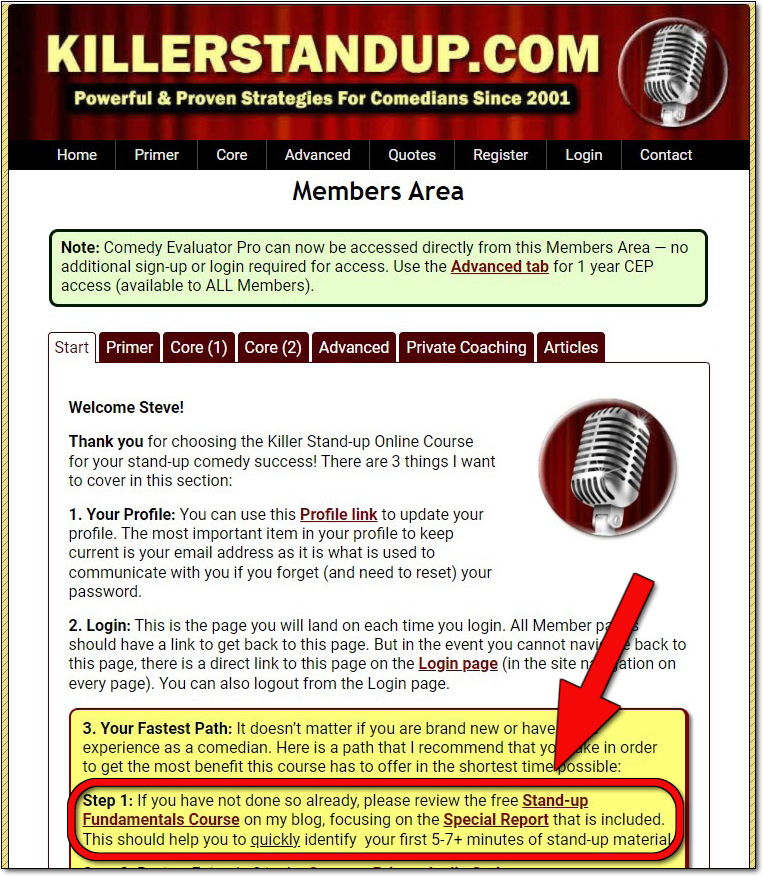 You Have Nothing To Lose

The real purpose of this course is designed to provide funny people with a different, more advantageous starting point and perspective when it comes to the information that is initially used to develop and deliver a professional stand-up comedy routine or add humor to speeches and presentations.

I can tell you with great confidence that this course can have a profound effect on whatever “how to” methodology or system you ultimately decide to use to develop and deliver a stand-up act that kills audiences. 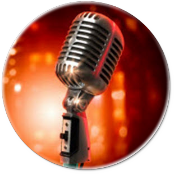 At the very least, you should be able nail down ample potential stand-up material bits and comedy ideas in a very short period of time as a result of the information revealed in the Special Report introduced in SCF Course Module 2.

And while there is certainly a slant towards my own instructional offerings in these course materials, I have produced this course in such a way that it should have a noteworthy benefit no matter what system or method you use to develop and deliver a stand-up comedy act for the stage.

With that said, click on each SCF Course Module title to open it to review the course…

SCF Course Module One: About Your Talent

CM1: Understanding Your Comedy Talent Is A Big Deal

These first two articles are provided for those who question their comedy talent and their ability to cause others to laugh — particularly when considering the prospect of entertaining audiences as a comedian:

I would pay particularly close attention to this article as it will introduce you to a different and more effective way to bring your already developed comedy talent to audiences in the shortest time possible:

Here are the links to the first two lessons of the Success Primer from the Killer Stand-up Online Course — the first lesson is available to the public; the second lesson is usually only available to Members but can be accessed from this page as a part of the Stand-up Comedy Fundamentals Course:

IMPORTANT: No matter what system, method or process you use to develop your stand-up comedy material, it should always directly incorporate your natural comedy talent that you use to cause others to laugh.

Otherwise you are destined to struggle needlessly trying to “find” what will work for audiences when you have already been using what works for you to generate laughs when you are talking to friends, families, co-workers and people that you meet everyday.

CM2: Your Approach To Stand-up Matters

My approach to developing a stand-up comedy routine is very different than what is usually provided by popular comedy experts and resources.

To give you an idea of how I approach  stand-up comedy and how it may be different than what you feel that you know about becoming a comedian, please review this revealing article:

Now for the reality check — the chances are very good that you have already accepted the conditioning commonly associated with stand-up, such as trying to use “writing from thin air” as a substitute for talking and expression that you use everyday with little effort to get laughs from people that you know.

If you are reading this, then you are about to find out that the difficulty factor that you will experience as a new comedian is directly related to the information that you use to develop a stand-up routine.

Here are 2 hard hitting articles that describe what I am talking about:

Armed with what you already know about your comedy talent and how important it is in the process of creating and developing a killer stand-up act, this next article and the special report linked below have the potential to significantly change the way you look at developing a stand-up routine AND expose how you have a quantity of proven stand-up material that you already have to work with RIGHT NOW:

Probably THE MOST POTENTIALLY IMPORTANT resource that you should review provides detailed information about how you have been creating and producing HOURS of highly customized, already proven comedy material each year and didn’t even realize it:

Special Report: The Stand-up Secret That No One Else Will Tell You

This SCF Course Module starts with an audio episode from the Stand-up Comedy Secrets For Beginners Audio Series that address the most common challenge that virtually every comedian faces, which is…

Creating and developing the stand-up comedy material for an act that gets laughs.

This audio is usually only available to paid Members:

About a third of the articles on this blog are about producing stand-up comedy material and picking apart the prevalent issues with trying “write” a stand-up comedy routine (or jokes) from thin air from a blank piece of paper:

Here are my article selections for this part of the course:

Because of mainstream conditioning it can be very difficult for some people to realize that there are only 3 specific differences between something said in a casual conversation that gets laughs and something said on stage to an audience of strangers.

This was revealed in this special report that you were introduced to in Module 2. The information provided in that special report is the key to having much more potential stand-up material than you can get stage time to deliver — right now.

If you have thoroughly reviewed the information provided in the previous Modules, then you should be aware that you are already in possession of 15-30+ minutes of potential stand-up material right now — before you even touch a computer to structure and hone it into tight stand-up material.

But if you are like most people (me for instance), you may be compelled to engage in activities that logically seem that they may be helpful when it fact they have little if any value at all.

Here is a selection of articles that represent some of the no value activities that I am referring to:

You should also be aware that there are “experts” who are actively peddling systems for producing stand-up comedy material that are basically being misrepresented as a “natural” or more “organic” way to produce comedy material, when it is really a poorly “cloaked” version of the same old and ineffective “writing” approach that has caused new comedians to suck at open mics for decades.

That information is provided in this special report:

Special Report: Have You Been Bamboozled By These Stand-up Comedy Writing “Enhancement” Tactics?

It should go without saying that a comedian’s performance, delivery and confidence is critical to getting big and frequent audience laughs.

There is a lot to know about performing as a comedian.

So the best that I can do for a fundamentals course such as this one is to provide some important information related to performing that most new comedians are usually not exposed to:

In my professional opinion it is rehearsal that is critical to exceptional delivery of stand-up comedy material if you want the big laughs. And believe it or not…

You are in possession of one of the most powerful rehearsal tools available (it’s called your smart phone), especially when coupled with an inexpensive smart tripod. This combination for rehearsal success is covered in this special report which is usually only available to registered Members:

Special Report: The Rehearsal Secret Every Comedian Should Know

Most new comedians start out at comedy open mics in order to hone their stand-up material and performing skills.

Here are some select articles about comedy open mics that I believe might be valuable, particularly for those who have not yet been to one or performed at one:

Here is one of two episodes from the Stand-up Comedy Secrets For Beginners audio series that covers information about comedy open mics (this episode is usually only available to registered Members):

IMPORTANT: If you are already involved in public speaking as a teacher, trainer, lecturer or instructor — please don’t lose sight of the fact that when you generate laughs in those environments you are using your comedy talent and already developed stand-up comedy skills to make those laughs happen.

Contrary to popular belief, any public speaking should be considered “stage time” when it comes to spoken word comedy material that generates laughter.

You might be interested in this article on my blog for adding comedy and humor to speeches and presentations:

From The SCF Course Author

A Personal Note From Steve Roye

I hope you find my Stand-up Comedy Fundamentals Course helpful in your comedy adventures!

As you move forward in your quest, I wanted to provide you with some final thoughts and some recommendations that may be beneficial:

If you ultimately cannot reach that performance level, you are on the Titanic (so to speak) and the ending is not good.

The good news is that you DO NOT have to wait or reach a certain level to generate the big and frequent laughs that you need to draw attention to your comedic abilities — you can do it as soon as you know how to capture and structure your natural comedy talent for the stage and deliver that material flawlessly like a pro.

The most important thing that you can do for yourself is be aware that there is a mountain of information about stand-up comedy and producing a comedy routine that is just flat out wrong, yet it is readily accepted as “the conventional way” to do it.

All the best,
Steve Roye
Author of the Stand-up Comedy Fundamentals Course

P.S. The information provided in the 5 free lessons in my big course for comedians should make a lot more sense if you have gone through this fundamentals course: