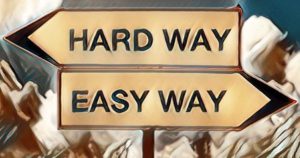 The easiest way to write jokes that work to get big audience laughs as a comedian is to use and apply the exact same strategies and methodologies that you already use with ease to generate laughs in everyday conversations.

In other words, you have already been “writing” jokes and using using stand-up comedy strategies and techniques suited specific to you and your sense of humor for years.

In contrast, the absolute most difficult way to write jokes that work to get big audience laughs is the one the vast majority of people use (and fail) to become a comedian and that is trying to “write” fabricated jokes onto blank paper in some sort of formulaic way.

Oddly enough, virtually all of the other stand-up comedy experts who produce books and other educational materials for new comedians promote a paper generated “written joke” approach when it comes to producing stand-up comedy material for the stage.

Let’s look at this in a different way using a series of questions:

Did you develop your comedy talent using written notes or ANY kind of writing at all? Nope, didn’t work that way. You developed the sense of humor and comedy talent that you have by talking, expressing yourself and interacting with others.

Do you believe that writing and talking are exactly the same form of communication? If so, you are automatically in the “waiting to bomb on stage repeatedly” category because talking and writing are as different as the sun and the moon.

The reason that this is important to know is because everyone who considers becoming a comedian was developing and delivering their own comedy material that generated laughs when they talked — NOT some paper written, plucked from the rear end version of something that was made up or otherwise fabricated that was read out loud or read by the recipient.

So let’s look at what I have present a bit more closely.

Not one single individual who wanted to be a comedian developed the live and in person comedy skills they bring to the table by passing along paper written note and jokes that others read and then started to fall down laughing.

In other words, not one lick of “writing” skill was needed to generate those live and in person laughs you have been generating for years when you talk to real live people — just like the real live people you will ultimately talk to as a comedian.

But now that you have made the decision to take a shot at stand-up comedy, you somehow must magically have to learn how to somehow produce paper “written” jokes out of thin air — jokes that do not reflect your real comedy talent and the comedy skill you have in the live and in person environment.

You May Also Like:  How Much Of What Stand-up Comedians Say Is True?

Don’t get me wrong – stand-up comedy material should be written down (which is different from trying to “write jokes”) for the purposes of editing, structuring, line control and punchline frequency.

Since you can’t see words as they are leaving your mouth, you need to have some way to sharpen, hone, edit, etc. what you are going to say to an audience without losing how you communicate and express yourself verbally in the process (otherwise, you end up muffling your comedy talent).

That is exactly how you set yourself up to get the average of 4-6 laughs per performing minute you need to move up the food chain quickly as a comedian.

But trying to “write jokes” out of thin air using only words that are structured for ONE reader to read generally gets little if any laughter response from a live audience because too many words were used and the punchlines aren’t funny.

So the easiest way to “write” jokes is to not actually “write” them in the literal sense but more from the perspective that stand-up comedy is about talking, just the way you have been talking to others and making them laugh for years.

It’s about structuring the talking that you already do to get laughs when you casually talk to friends, family and coworkers everyday.

And if you know what you are doing to develop a well prepared, tight, big laugh stand-up comedy act – you will move up quickly in the world of stand-up comedy. How do I know that?

Simply visit any number of stand-up comedy open mic nights and count the comedians who are trying to croak out 3 minutes of paper written jokes that aren’t even remotely funny.

You will also find most of those comedians have been doing the comedy open mic scene for MONTHS without making any real progress and continuing to suck performance after performance.

Before you go any farther, take the time to check out the free Episode 2 audio (50 minutes) about producing stand-up comedy material.

Like most  everything else in life, there is a hard way and there’s an easy way to approach becoming a comedian and developing the comedy routine that will blow audiences away.

Just know that you don’t have to “write jokes” in order to be able to develop and deliver high level, big laugh stand-up comedy material in record time that is based on the comedy talent you already have.